The Rover V8 engined version of the TR7 grew out of the Dolomite-Sprint engined TR7 which had been rallied in 1976 and 1977. Delayed by production problems and then the closure of the Speke plant, the TR7 V8 was destined to become something of an embarrassment to BL's marketing men. Eventually launched in America early in 1979, it was hailed as 'the sports car reborn'. In the meantime, the competition version had started winning events.

It is impossible to consider the progress of the TR7 without also looking at the career of Tony Pond, established as Britain's fastest rally driver of his time. Pond nurtured the TR7 through its early days, giving both the 16-valve version and the V8 version their first wins. In 1979, he left BL Motorsport under a slight cloud, but for 1980 he was back again. The new team was a happier team to work with and the results started to flow. Alongside Tony Pond, many of the car's best results have come from Per Eklund, the Swedish driver who joined the team in 1979 after leaving Saab. And, further afield, John Buffum used the TR7 V8 to dominate North American rallying over a number of years. Buffum won the SCCA Pro-Rally title four years in a row and was the 1980 North American champion.

From the outset it had been apparent that the TR7 was a better rally car on tarmac than it was in the forests. Chassis developments designed to help get over the problem were implemented and it was significant that Per Eklund's third place in the 1980 1000 Lakes Rally was his highest ever finish on that event. Tony Pond finished fourth on the Scottish in 1980 and second at the BP Rally-sprint. Even before BL Motorsport announced that they were going to rally the l6-valve version of the TR7, there were rumours that a V8 version of the car was on the drawing board. So, when the car first appeared at the beginning of 1978. it was no real surprise. With the Rover engine lighter than the old Triumph unit, and considerably more powerful, it seemed that BL might have a winning car at last. In two years of rallying with 16-valve TR, results had been somewhat thin on the ground.

Tony Pond launched the TR7 V8's rallying career with a win first time out on the Granite City Rally in Scotland, a round of the Castrol/Eurosport National championship. Despite this encouraging debut, it was soon apparent that the suspension and chassis development which had been good enough for the less powerful car was certainly not suitable for a car now developing almost 270bhp. 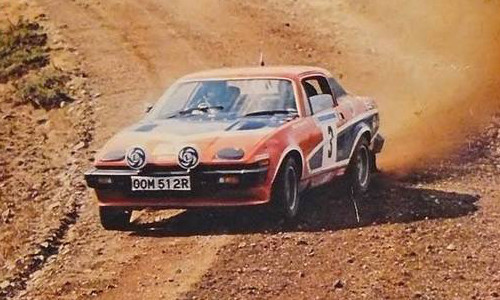